(This is the side-view for a series of incoming maps depicting the ruins and dungeons of Castle Grimgrannog. Included in each entry will be a new feature: a dynamic random encounter table for stocking the dungeon. Additionally, I’m including a bit of backstory for the castle to be used or ignored however you may wish.)

On a low bluff overlooking the banks of an appropriately menacingly named river, Castle Grimgrannog was once the seat of power for the dastardly Baron Angmort Grannog. The castle had been the Grannog family steading for the adequate passage of enough generations to allow for the commonfolk to speculate upon the disappearance of the Grannog family jawline and chin in hushed, serfish chitchat whilst not earning their keep in the fields. 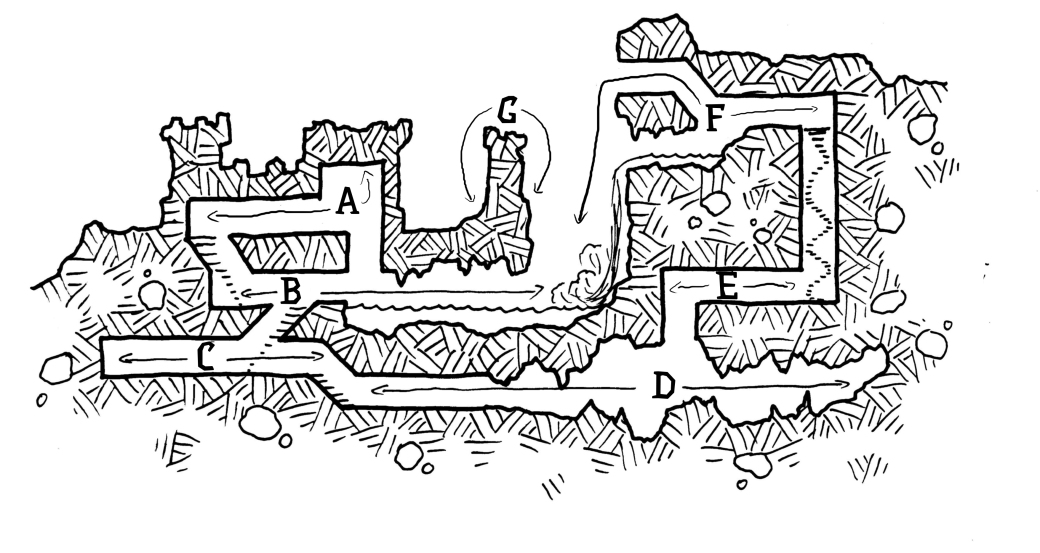 But the Grannog’s didn’t build the castle, despite their claims otherwise. In fact, the castle was purchased by the slumlord and sometimes moneylender Bert Grannog over a century ago. Bert originally intended the castle to be loaned out to down-on-their-luck nobles in need of a good showing of power but as the mounting costs of sending in expeditions of monster-killers, torchbearers, misled gallivants, and mildly errant knights began to accumulate, he sealed off the lower chambers and moved his wife and nine children into the castle initially as a summer home, though they, not Bert, would find themselves wintering in the castle as the years went by.

A few generations later, Angmort Grannog managed to purchase the title of baron from a fleeing third rate scion of a nearby kingdom and styled himself as the Baron of Grimgrannog. This didn’t last. The baron grew tired of managing the troubles of serfs incapable of tugging on their own boostraps and hightailed it to the family’s port-of-calling downriver, leaving the castle to crumble and attract bored and/or drunken adventurers seeking “treasure”, wandering monsters in need of “facilities”, and most recently a cabal of necromantic squatters.

The waifish necromancers and their hangers-on have since precipitously lowered the castle’s property value, as well as that of the nearby farmsteads. This cabal has taken to calling itself the Nine Sons of Azthrax (with no indicaiton of who Azthax actually is) and were tolerated with a sort of you-don’t-dig-up-my-grave-I-won’t-dig-you-one disinterest from the locals for some time. This was until a farmer recently attempted to slaughter a cow, only to have it develop opinions to the contrary and wander off headless into the nearby woods.

Meanwhile, the Nine Sons of Aztrhax (though two would be more accurately classified as daughters) have taken to unearthing the ignored catacombs underneath Castle Grimgrannog in search of something called the Crown of Azthrax, even though they really have no idea what this crown actually does or looks like. (In all truth, it could just be something made up by the cult’s founder years before that just sort of stuck.)

Bur recently, Angmort has returned and seeks to evict the squatters. He wants his castle back but the commonfolk of the area haven’t quite decided yet if they prefer the necromancers or the Grannog baron, whose arrival already purports suspicious causal relationships.

Coming Updates
In the coming days, I’ll be posting different levels of Castle Grimgrannog alongside additional material for stocking the ruins and dungeons. I might even throw in some NPCs and additional backstory for good measure.