Another creature for my future Metamorphosis Alpha Campaign–the Psychic Goldfish. These guys will be a reoccurring threat against the PCs while they explore the Mutual of Omaha Starship Vonnegut. I’ve included stats for Metamorphosis Alpha 1st ed. as well as stats for Dungeon Crawl Classics. I hope to run the game using the Mutant Crawl Classics rules when they become available with a strong mixture from the MA 1st ed. books Goodman Games is putting out. Anyway, here are those maniacal pet fish.

Appearance: Physically, Psychic Goldfish are no different from common goldfish which were kept by the ancients who lived on the starship. They grow up to more than 12 inches in length and can weight more than 5 lbs. They are known for their golden scales. An elaborate caste system exists in Psychic Goldfish society related to the luster of these scales but no one outside of this society has fully mapped its intricacies.

Normal Reaction: Psychic Goldfish believe themselves to be mentally superior to all other species, mutant or human, they encounter and even when they encounter a creature or force that could easily defeat them, they have a tendency to let pride and ego get in the way of peaceful resolutions.

Terrain: Most Psychic Goldfish colonies can be found in aquariums across the starship, including one purported level that is made up entirely of a massive aquarium, though the Psychic Goldfish do not hold dominion over the whole deck. Also, they have been known to flood entire sections of sub-decks for habitation and take over “natural” waterways where they can find them. Generally, Psychic Goldfish have proliferated across a large portion of the starship thanks to their ability to use telekinesis to manipulate their environment and their tremendous intelligence and resourcefulness. Very rarely, though, do Psychic Goldfish colonies act in tandem. More often than not they are at war with one another and seek to kidnap prospective breeders from other colonies if the chance arises.

Procreating: While Psychic Goldfish procreate generally the same way as normal goldfish biologically, living in a complicated caste system which no one outside of their society has been able to unravel (something to do with the luster of their scales), their mating rituals and egg release/insemination arrangements often involve great efforts of diplomacy, bargaining, economic agreement, subterfuge, and outright assassination.
In order for Psychic Goldfish to procreate, conditions in their environment must be exact. Their containers, whether natural or artificial, must be clean, which is something of a challenge in many parts of the starship. As a result, they are constantly scavenging for formaldehyde, copper sulphate, and terramycin in order to lower stress levels in their habitats, as well as, when living in aquariums, any sort of “props” that can double as natural environmental features. In times of great need, Psychic Goldfish males and females, and their relatives, can overpower desirable mates who refuse to breed and stimulate their vents using telekinesis to release sperm or eggs. In this respect, the kidnapping of other scions of the Psychic Goldfish noblesse is not unheard of.

I’m still in the process of adapting Metamorphosis Alpha mutations to DCCRPG, so bear with me and I’ll have those abilities up soon(ish). 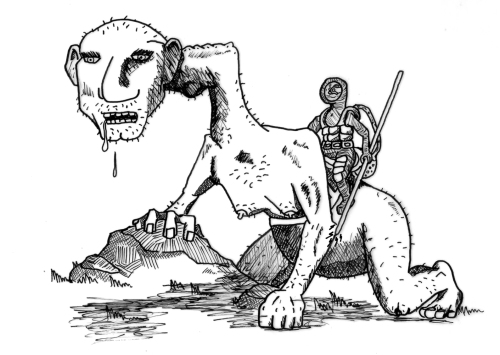