Here is my first (major) attempt at drawing a layout for an inn. I wanted to do something a bit more detailed than the usual dungeon map, so I added quite a few embellishments to the layout, such as tables and beds, etc. I like how it turned out. As per what’s becoming the common trend, below the map is a number of ideas on the dignified history of The Floggèd Pollywogg and ways you might incorporate it into your games. 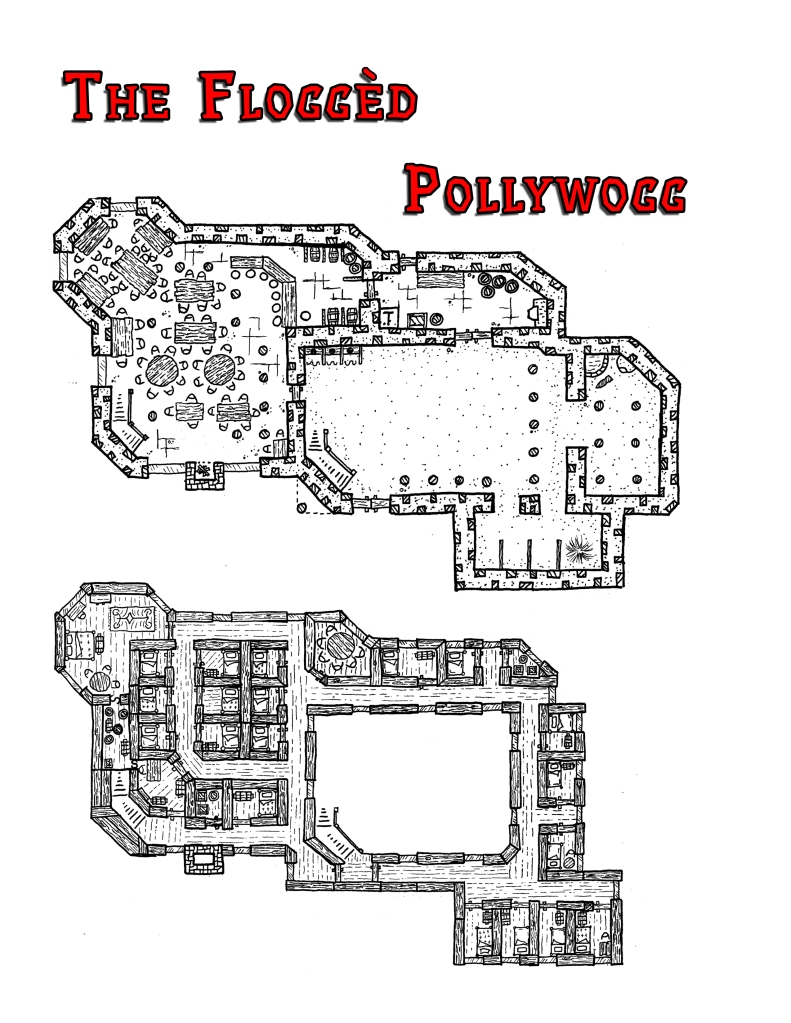 Established some 300 years ago in [insert rural crossroads of whatever sort you like but preferably near the border of the “Great Swamp,” where even the most pestilent of adventurers fear to tread], The Floggèd Pollywogg’s writ of ownership has changed hands an alarming number of times and the physical document has several strange stains upon it, many of them identifiable as blood, but not always of a reddish hue. The current owner of The Floggèd Pollywogg is a middle-aged woman by the name of Hroldabar Not-Once-a-Wife who it is said, by the toad- and frogmongers of the area who are perpetually infatuated with her, was once a reaver in some northern land the name of which they’ve never heard. While no evidence of this is apparent, other than Hroldabar’s impressive physique and her battle axe, she has been known to expertly maneuver a number of full grown drunken rabble-rouser, heavily armed hobo, or misguided bard out the open door without their feet being involved. Hroldabar came into possession of The Floggèd Pollywogg when the previous owner, Marty, up and abandoned the place, handing over the writ of ownership to his then only patron, Hroldabar, one morning under “mysterious circumstances,” and anyone who asks otherwise can take it up with Hroldabar herself or her cook Morga the Unhusbanded. It was Hroldabar who changed the name of the establishment from The Floggèd Pollywogg Inn to The Floggèd Pollywogg Bed & Breakfast.

Of course, The Floggèd Pollywogg has a number of rumors concerning its current owner and its history, which can all be divined through a roll of a 1d3: